I needed a fast PageRank for Wikisim project. It had to be fast enough to run real time on relatively large graphs. NetworkX was the obvious library to use, however, it needed back and forth translation from my graph representation (which was the pretty standard csr matrix), to its internal graph data structure. These translations were slowing down the process.

I implemented two versions of the algorithm in Python, both inspired by the sparse fast solutions given in Cleve Moler’s book, Experiments with MATLAB. The power method is much faster with enough precision for our task.

I modified the algorithm a little bit to be able to calculate personalized PageRank as well.

What is the major drawback of NetworkX PageRank?

I gave up using NetworkX for one simple reason: I had to calculate PageRank several times, and my internal representation of a graph was a simple sparse matrix. Every time I wanted to calculate PageRank I had to translate it to the graph representation of NetworkX, which was slow. My benchmarking shows that NetworkX has a pretty fast implementation of PageRank ( networkx.pagerank_numpy and ‘networkx.pagerank_scipy), but translating from its own graph data structure to a csr matrix before doing the actual calculations is exactly what exactly slows down the whole algorithm.

Note: I didn’t count the time spent on nx.from_scipy_sparse_matrix (converting a csr matrix before passing it to NetworkX PageRank) in my benchmarking, But I could! Because that was another bottleneck for me, and for many other cases that one has a csr adjacency matrix.

The python package is hosted at https://github.com/asajadi/fast-pagerank and you can find the installation guide in the README.md file. You also can find this jupyter notebook in the notebook directory.

What is Google PageRank Algorithm?

PageRank is another link analysis algorithm primarily used to rank search engine results. It is defined as a process in which starting from a random node, a random walker moves to a random neighbour with probability or jumps to a random vertex with the probability . The PageRank values are the limiting probabilities of finding a walker on each node. In the original PageRank, the jump can be to any node with a uniform probability, however later in Personalized PageRank, this can be any custom probability distribution over the nodes.

How Google PageRank is Calculated? [1, 2]

Let be the adjacency matrix ( is the weight of the edge from node to node ) and be the teleporting probability, that is is the probability of jumping to node . Probability of being at node at time can be determined by two factors:

There is a serious problem that we need to take care: is the inverse of , which for a diagonal matrix it will be simply inverting the elements on the diagonal. This will break if there are nodes with no out neighbors, a.k.a, dangling nodes. What happens when you hit a page with no out link? You only have one option and that is to jump to a random page.

To simulate this behavior we alter by adding an edge from every dangling node to every other node with a weight of . In other words, we create by replacing each all zero row by . Formally, if we define to be the vector of row-wise sum of the elements of , that is , then:

We need to re-define . In our new definition of , we ignore nodes with no out-neighbors (or in other words, replace by ). Similar to , we define to be the diagonal matrix of the out-degrees of . So we can rewrite the recursion as:

Now , the stationary probabilities (i.e, when ) can be calculated by either of the following approaches:

We can solve Eq. and get:

And use a linear system solver to calculate .

Basically, reiterating the Eq. until it converges.

How Fast Google PageRank Is Calculated? [3]

To speed up, we need to take advantage of sparse matrix calculations. The only problem with the current formulation is that has a lower sparsity than the original . However, we can move around pieces of the equation a little bit to skip forming this matrix. We know that:

For the first term, multiplying by this diagonal matrix scales each column and and are different only in the elements whose correspondent columns were all zero in , so we can safely replace with . Also because the non zero columns of are all , which add up to , and therefore their correspondent element on will be . Therefore,

and using the above equation we can rewrite Eq. and get

Being a normalized vector, we know that . We can multiply the last term of Eq. with and factor out :

Let be . Notice that is a matrix with as its columns, and substituting the definition of , the matrix will be:

How does this help to improve the calculations? We’ll see:

Similar to before, we can solve Eq. and get:

Being able to re-parenthesize, is just a number, so we can ignore it and renormalize at the end, and solve:

We almost have the same linear equation system that we had before, except for one big improvement, we replaced the less-sparse with .

We can apply one last smart modification to Eq. : if we change the parenthesizing of the last multiplication (remember the famous dynamic programming algorithm?), and also define , we will have:

Therefore, the complexity decreased to , and the whole recursion will be . The rate of convergence is another thing, which we ignore here, and depends on the value of the second eigenvalue () of the modified transition matrix (), which is defined as:

To avoid the clutter, we only visualize the fastest method from each implementation, that is: 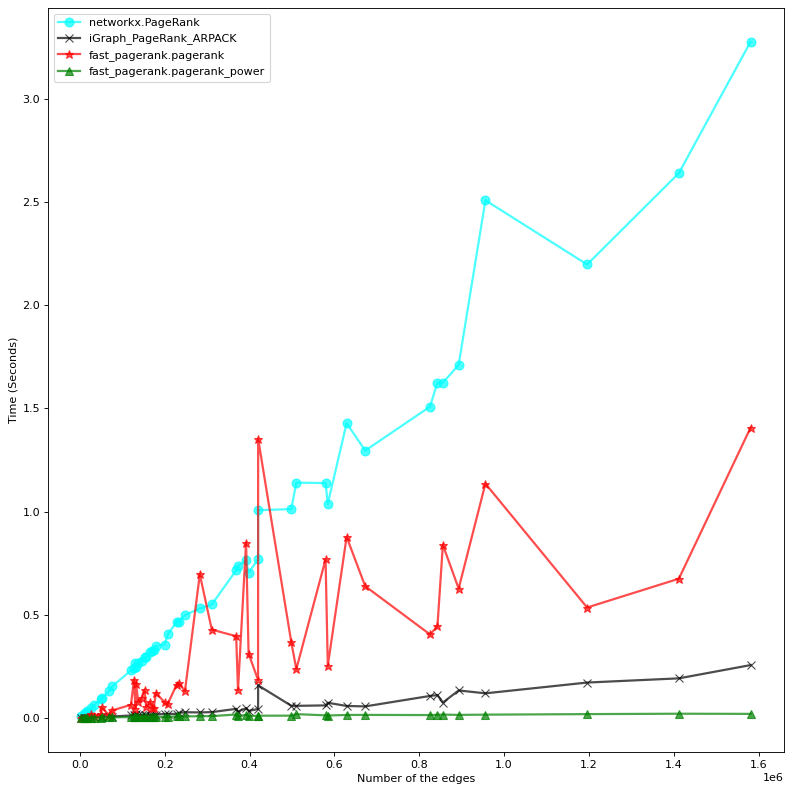